If you’re new to all this talk about EMF radiation your might be a little confused about all the abbreviation and the different terms involved.

Two words this come up all the times are EMF and RF (radio frequencies). The ladder is also known as just “radio waves”.

Are EMF & Radio Waves The Same?
Radio Waves is EMF radiation within the frequencies of 300 kHz to 300 GHz. The full spectrum of EMF also includes other types of radiation such as ELF, Infra-Red, Visible light, Ultraviolet, X-ray, and Gamma Rays. Radio waves are abbreviated as RF (radio frequency).

This is the short and precise answer and here is some more information that will clarify this for you. 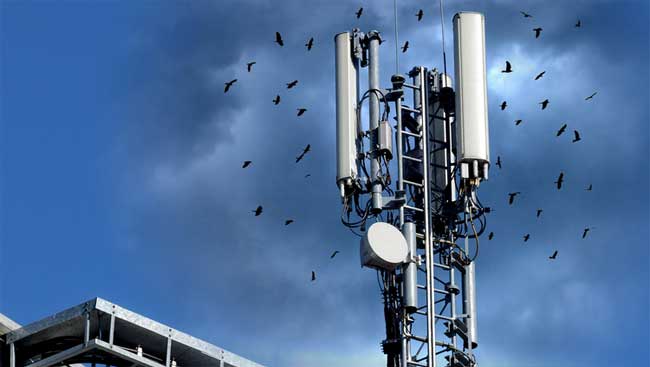 Let’s start with what’s behind the three abbreviations EMF, ELF, and RF:

For some reason, we don’t include the “R” for radiation when we talk about radio frequency radiation. This can be a little confusing. But now we know what the two abbreviations stand for.

The easiest way to explain the difference between the two is by explaining first what EMF is in a short sentence.

The thing is that EMF is a whole variety of radiation of which RF radiation is just a little part of the spectrum. EMF radiation includes a whole bunch of different radiation types, such as:

The RF radiation, in particular, is unique because it is emitted by our everyday electronic devices such as phones, wifi-routers, tablets, computers, Bluetooth devices (but more on that in a second).

What So Special About Radio Waves (RF) Compared To Other EMF Types?

The reason why we focus so much on the radio waves is that they are everywhere among our everyday gadgets.

While there are many opinions on exactly how dangerous they are to our bodies, there is certainly consensus about that the amount of radio wave radiation is growing rapidly.

This is why we focus so much on the RF part of the EMF radiation spectrum.

Here are some of the most common sources of radio frequency radiation in our everyday lives:

As you can see, the list goes on and on and new gadgets and “smart” stuff are added to this list all the time as we figure out new ways to connect EVERYTHING around us to wifi and Bluetooth signals.

Before we get into the specific health issues associated with these types of radiation, we will take a look at why these RF waves keep increasing in volume and strength all around us.

As you probably know, we are quickly moving toward the 5G connected Internet. Every time we move from 2G to 3G to 4G etc. we increase the number of antennas and cell towers around us.

When you combine this with the fact that people are using their mobile phones, tablets, smart TVs, smart watches, etc. more on a daily basis you get the point. The amount of radiation we are being exposed to is increasing rapidly. Everywhere.

This is because the telecom industry is trying to connect this to a more and more online environment. At first, this sounds like a brilliant idea because we are all of us they’re dependent on Internet connections everywhere, right?

We have more and more gadgets to connect and we are even looking to connect our cars to the grid, so why not get as many antennas up as possible?

What Are The Main Issues With RF Radiation?

It’s actually a field of study which has been growing rapidly over the last couple of years.

There’s not much government-funded research going on but people are starting to become aware that the rapid growth of radiation from the radio waves around us impose an increasing risk to our health. So more and more engineers and scientists are waking up to the challenge of finding out just exactly how these types of radiation are impacting our cells and bodies.

One of the most prominent people to mention here is Professor Martin Pall, Ph. D. He is spent several decades studying the field of EMF radiation and how it affects our bodies on a cellular level.

And what he has found and discovered is remarkable and alarming.

Historically, people have measured the impact of EMF radiation, such as radio waves, by looking at how much the radiation will heat up our bodies. But according to Martin Pall, this is an outdated and stupid way of looking at the issue. He has found out that our cells are being affected much more by long-term EMF radiation than we previously thought.

The problem is that we don’t know exactly how it affects our bodies over long periods of time but we have already observed several issues over the last couple of decades.

Remember, rapid cellphone use and cellular networks are still a fairly new technology. We will have to wait a couple of decades more before we have studies of how our bodies are affected over very long-term exposure to these types of RF waves.

How Much EMF Radio Frequency Radiation Am I Being Exposed To?

There’s really just one way to find out and that is by turning on an EMF meter.

EMF meters are wonderful little devices that will let you know exactly how much radiation you are experiencing in your home, your bedroom, your children’s bedroom, etc. And like the rest of us, you might get surprised when you turn it on.

I recently bought this EMF meter which was recommended to me by several authors on the subject (including Martin Pall we mentioned above). It’s a pretty cheap device (less than $200) and it lets you read the amount of EMF radiation everywhere you point it.

It’s the only way to know for sure how much RF radiation you have around you because we cannot hear or see these waves. The frequencies of the radio frequency waves (RF) are lower than visible light which makes it impossible for us to detect them without an EMF meter.

Luckily, these meters are priced very reasonably and they are becoming increasingly popular these years as people are starting to investigate the radiation for themselves.

More and more articles are being published in the bigger newspapers and the mainstream media are starting to catch on to the possible threats from RF radiation. The same goes for other forms of EMF radiation such as Magnetic Fields (MF), Electric Fields (EF), and Dirty Electricity (DE).

What Level Of Radio Frequency Radiation Is Dangerous?

We are always exposed to low levels of radiation from radio frequencies. But when exactly does it become a problem?

Well, this is really hard to answer because we actually don’t know exactly.

Let’s start by looking at which levels the FFC is recommending as upper limits for RF radiation. They have set the bar very high compared to all other countries.

The U.S and Canada actually have the highest allowed limits for RF radiation. Here we are allowing a whopping 61,4 V/m. A number that can be very hard to wrap your head around.

Because, just how high is this really?

Let’s compare it to the limits we find among other countries.

Belgium has set the maximum limit at 21 V/m which is around one-third of the U.S/Canada limit. Russia, China, Luxembourg, and Switzerland are even more cautions by setting the maximum limit as low as 6 V/m. That’s almost 10X lower than here in the States!

The fact is that we just don’t know. And this uncertainty is very well illustrated by the differences in allowed exposure levels per country. And it also goes to show that we should probably try to lower the amount of this radiation as much as possible because several top scientists in the field have proposed that EMFs are “the new smoking”.

Several decades ago we all thought that cigarettes were not that harmful. Most of us knew they weren’t good for us but we didn’t think they would that bad either. Today we are more enlightened on the matter and from looking at the number of people who suffer from EMF-related issues, there’s very reasonable cause to take very serious precautions when it comes to RF and EMF in general.