There are many different types and brands when we are looking at EMF meters. They have become increasingly popular during the last couple of years as people have started to wake up about EMF radiation.

I personally prefer the Cornet ED88Tplus meter for my testing. 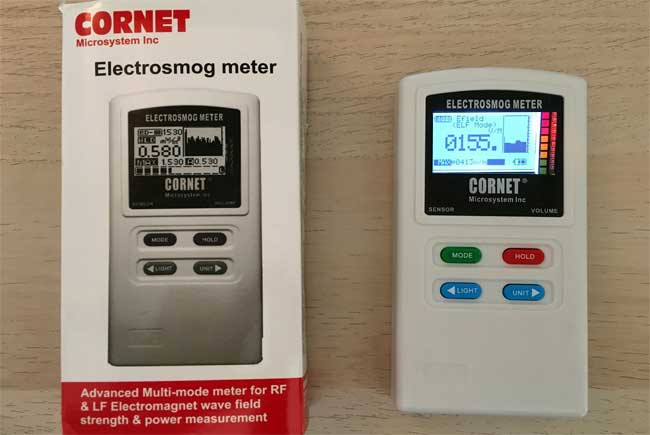 You can check the current prices here on Amazon.

The Cornet ED88Tplus Is (Probably) The Most User-Friendly EMF Meter

The main reason why I like this EMF meter so much is that it is extremely easy to use.

When we are working with EMF radiation things can quickly get complicated. This is because people use different measuring units when they are talking about EMF radiation.

This can be very frustrating, especially if you are new to the world of EMF and you are trying to understand what the many types of radiation mean. It certainly was from me, when I first started to learn about EMFs.

The greatest thing about this EMF meter is that you don’t really need to understand all the mathematics behind the measuring units. As long as you know which type off radiation you need to measure, you are good to go.

And even if you don’t know what type of radiation you are looking for, you can actually still use the meter by simply going through the 3 different types of radiation it can measure (we will get back to what it measures in a second).

This is a really great feature because it translates the numbers on the screen in order to show you if you are measuring low, medium or toxic levels of EMFs.

Tip
Trust me, sometimes you will mess up the different measuring units because now are a lot of different ways to measure EMF. If you are getting confused by words such as milliGauss, V/m, μW/cm², etc. you are not alone. Here’s our (easy) guide for beginners who want to learn about EMF measuring units.

I really love this indication of the right side of the screen because if I get confused I can always look at it to know how bad the radiation is (in real-time) as I measure it.

We heard about it pretty quickly when we started learning about EMF and consumed everything we could find on the subject to educate ourselves.

It turns out that a long list of EMF engineers, scientists, and authors on the subjects use to this device. It is the go-to device for prominent people such as Ph.D. Martin Pall and the author of the excellent e-book “The Non-Tinfoil Guide To EMF” Nicholas Pineault. It is also recommended by Jeromy Johnson who did the famous TED talk about EMF a couple of years ago.

What Do We Need Our EMF Meter To Measure?

Let’s start by clarifying what we need from an EMF meter.

We definitely want to be able to mess your RF radiation. RF radiation is what you find from routers, smartphones, laptops, tablets, cell towers, smart meters, the list goes on and on.

Here’s an introduction to RF radiation. It’s a great place to start if you don’t know the difference between the radiation from a router and the radiation coming from your fridge.

On top of that, we also want to be able to measure ELF radiation. This is radiation coming from powerlines, electrical wiring, chargers for our electronic devices, electric motors in our homes, etc. We also have a guide for beginners who are starting to learn about ELF radiation.

These are the three types of radiation we find around our homes and in our everyday environments. The greatest thing about the EMF meter about the Cornet ED88Tplus is that it has three different sensors built in. One for each type of radiation we have listed above.

So, you don’t need more than one EMF meter if you go with the Cornet ED88Tplus.

It’s operated by a single 9 V battery which you insert in the back: 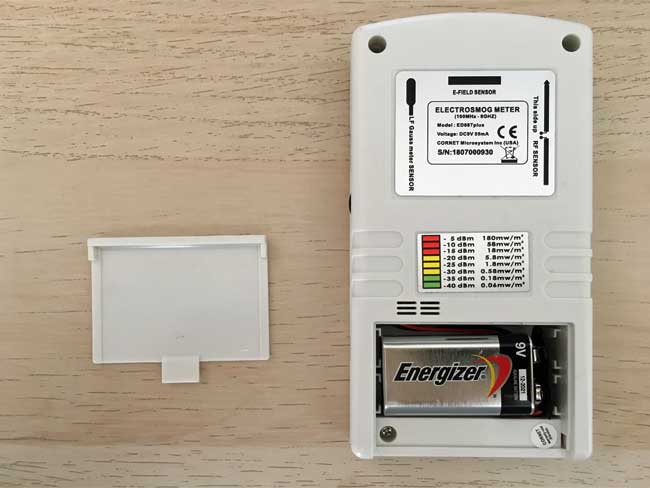 I’m actually using mine every day and I haven’t changed the battery for several weeks. So it’s pretty energy efficient I would say.

You can check the current prices here on Amazon.

It Fits In The Pocket

I also like how small this MF meter is compared to some of the longer and bulkier models out there.

This is the size: 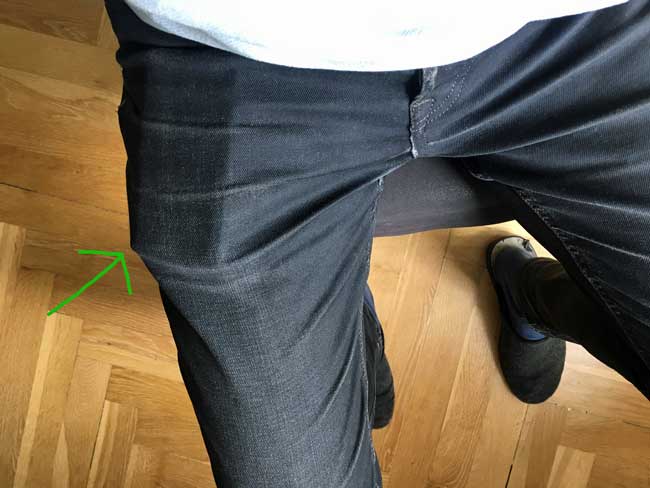 It might not sound like a big deal but it’s actually really handy to be able to put it in your pocket.

As soon as you pull it out and you start doing readings around you people will immediately move up to you to see what you doing. Especially if you have the sound turned on (that’s actually quite funny!).

Personally, I don’t always like the type of attention so it’s really nice to be able to put it away in my pocket when I want to.

The Price Is Right!

Well, that’s probably all good but how about the prize?

I found the Cornet ED88Tplus meter for less than $200. You can check the current prices here on Amazon.

You can find EMF meters the cost way more than this and you can also get the cheap Chinese knockoff. We have found that this is a good price range and it’s definitely at the lower end when you are looking at the professional equipment.

The reason why it’s not more expensive is that it has gained a lot of popularity.

When popular EMS experts online like Dr. Mercola, Martin Pall, Nicolas Pineault, and others started to mention and use this meter in their videos and writings, the demand went up and the price went down.

Of course, we also need to look at exactly what ranges and frequencies this bad boy can measure.

Here’s a table from the back of the packaging:

It’s a really great EMF Detector that does exactly what it should.

It will detect both ELF and RF radiation which makes it ideal for measuring radiation from a long list of sources such as:

It is a simple-to-use device that can do a lot of things.

You can find cheaper products out there that are often cheap Chinese knock-offs from this meter. You should expect to pay close to $200 in order to get a functioning EMF meter. The cheaper stuff just doesn’t cut it and they end up causing more harm than good because people will get readings all over the place.

That being said, even though this meter is probably the best in its price range, you can EMF meters in other (much higher) price ranges that are more accurate EMF meters. You should expect to pay closer to $1,000 if you want a professional EMF meter.

This meter is great for home use and to identify the main EMF sources in your home. You will see how much of a reduction you are able to make and you can monitor the amount of radiation from external sources such as cell towers (which unfortunately are being put up all the time).

It’s typically cheapest to get here on Amazon.