If you’re just getting into EMS radiation you might be wondering what the differences between RF and EMF radiation.

What’s The Difference Between RF And EMF Radiation?
RF is a type of EMF radiation that comes from radio signals, TV signals, Wireless devices & Satellites. The whole spectrum of EMF radiation also includes ELF (extremely low frequencies) as well as shortwave radiation from the sun. We typically find RF radiation in wifi and Bluetooth devices. 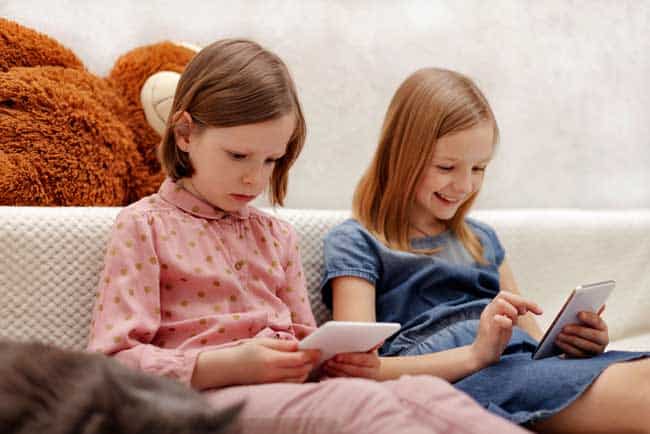 As mentioned above, RF radiation is one form of EMF radiation.

The RF types of radiation are what we normally referred to as Wi-Fi or Bluetooth signals. But it also includes microwaves and radio signals like AM and FM. The AM and FM radio signals are among the lowest frequencies we find among the RF categorization.

When we even lower in the frequencies we are starting to talk about extremely low frequencies which are also known as ELFs. But more on that in a minute.

Here’s a list of all the types of EMF radiation so you can see where RF radiation fits into the pictures.

As you can see, there are several other forms of EMF radiation other than the RF type. We normally categorize these as radio frequencies (RF), magnetic fields, electric fields, and dirty electricity.

Another way to categorize the different types of EMF radiation is by looking at the specific frequencies they have. The lower the frequency of the waves is, the more harmless the radiation typically is.

Types of EMFs By Wavelength

Another fact about radiation types that can help you understand the differences is to look at how warm the source of the radiation is.

The warmer the source of the radiation is the shorter the wavelength of the emitted radiation will also be.

If we take the sunlight as an example, this is shortwave radiation because the sun this extremely hot. while radio waves are not warm at all.

We can also categorize all the different types of EMF radiation in two major categories:

Here’s a full list of all the non-ionizing EMF’s we have:

And here’s the list of the ionizing EMF radiation types:

The difference between ionizing and non-ionizing radiation is to be found in how they affect our cells and our bodies and how long time they take to do so.

The ionizing radiation types will alter the cells in your body almost instantly when you are being exposed. Therefore we are very cautious about these types and we always do what we can’t protect ourselves. This is also why at the dentist will put a radiation shield (vest) on your chest when they take X-ray photos of your teeth.

When we are talking about the non-ionizing EMFs like RF, they will not alter the cells in your body as quickly. But they will still affect your body, in the long run, that’s we will look at in the next section.

Why Non-Ionizing EMF (such as RF) Is Dangerous

But even though the non-ionizing EMF’s are not damaging your body instantly they can definitely alter your cells. It just takes more time.

This is why the RF radiation is causing a lot of stir among scientists and health bloggers these years.

We are starting to find out what the long-term effects of non-ionizing radiation will do to our bodies. As it turns out, RF radiation is everywhere today. It has been more than 20 years since we said our current limits for RF radiation but today we are much much more exposed to RF radiation.

We’ll use our smartphones and tablets more and more and we put up wireless signals everywhere in order to communicate with the cloud. Everything has to be connected to the Internet these days and our devices connect everywhere over 4G and soon 5G connections.

So it’s very important to educate yourself about the long-term effects of RF radiation.

All our smartphones are tested for radiation while being held around 1 inch from the ear. But most people are pushing them up against their ear in order to hear the person that the other end.

This is a big problem because when you do that you increase the radiation on your brain significantly.

This is just one example of how we are using our electronic devices in ways they were never intended to be used. The reason why we always use smartphones and tablets as examples of RF and EMF radiation is that we hold them in our hands and press them against our heads all the time.

Historically, scientists haven’t been too worried about these types of radiation because we were only exposed to them for short amounts of time per day. But this is changing rapidly and kids growing up today will use cell phones and tablets many hours per day instead of a couple of minutes.

Kids Are Extra Exposed To The RF Radiation

Because growing kids have a thinner and softer skull the radiation will more easily reach their brains.

This is a very big problem because kids growing up today will probably be exposed to RF and are the types of EMF radiation during their whole lifetime.

For obvious reasons we don’t have any long-term studies of how these are RF types of radiation affects our bodies over a lifetime. The technology is simply too young for us to have any data on this yet. But I guess we will find out in a couple of decades and hopefully people will take enough precautions before the evidence gives us the verdict.

The best thing we can do today is to take all the precautions we can in order to protect our kids from RF and other types of EMF radiation. I’m pretty sure they will thank us later because they will have a whole lifetime of exposure and the wireless devices are becoming increasingly popular in the public space.

One way you should start if you’re having very small kids is by looking at your baby monitors. Baby monitors will emit RF radiation constantly when turned on. The problem is that the two devices are communicating with each other both ways. So the baby unit will send out a signal to your device and your device will send a signal back to the baby unit.

In other words, there’s constant RF radiation going on whenever you were using baby alarms.

What Exactly Is RF Radiation?

Things can quickly get pretty technical when we are talking about water RF radiation actually is.

You can click the link below to learn more about this. But for now, it’s sufficient to know that RF radiation comes from a long list of devices such as:

We have written a more extensive article over here about what RF radiation is.