Cell towers and your own home Wi-Fi router are some of the most important sources of EMF radiation in your home. But which one is worst and how much radiation do they cause?

In this article, we look at exactly how much radiation to expect from cell towers and your own wifi.

We also look at what you can do to shield yourself from the radiation.

Abbreviations used in this article:
EMF: Electromagnetic Fields (All types of radiation)
RF: Radio Frequencies (Radiation from wifi, cell towers and other wireless technologies
V/m: Volts over meters (How we measure RF radiation)

How Much Radiation Do Cell Towers & Wifi Routers Emit?

So which one is more harmful the cell tower outside your window or the Wi-Fi signal in your home?

The answer is that it depends on several factors.

The main difference is that your Wi-Fi router is typically pretty easy to distance yourself from it because your control where it is placed. The cell tower across the street, on the other hand, is stationary and you do not have any saying in where it points or where it is placed.

On top of that, it’s much easier to remove your Wi-Fi router than to shield off your walls and windows. It’s a tedious process to paint over your walls with EMF blocking paint and you will also have to apply the film on your windows in order to secure the whole thing.

Let’s take a look at how much exposure we normally get from the cell towers and our Wi-Fi routers.

Unfortunately, I have a cell tower just across the street. I think there are around 250 ft. (76 meters) from my house to the transmitter. It’s placed at the rooftop at the building right next to our apartment.

Here are some EMF measurements I haven’t done myself directly on my router box and from the cell tower just across the street.

This measurement is taken just outside my front door. As you can see, my EMF meter says that there’s 1.9 V/m and the scale at the right side of the screen also flashes the red light to alarm me that the level here is higher than it should be. (According to building biologists).

Here’s the same reading from inside the house.

As you can see, the brick wall does shield some of the radiation. It’s down to around 0.5 V/m.

I’m actually only 5 feet (1,5 meters) further away from the cell tower. The only difference here is that I’m on the opposite side of our brick wall. Our brick wall does shield off quite a lot of the radiation, but it’s not enough to be in the green zone on my EMF meter.

I will need to get down to 0.2 V/m in order to get into the green zone on my meter. This is the value that has been decided on by German and American building biologist in order to create safe environments for humans. 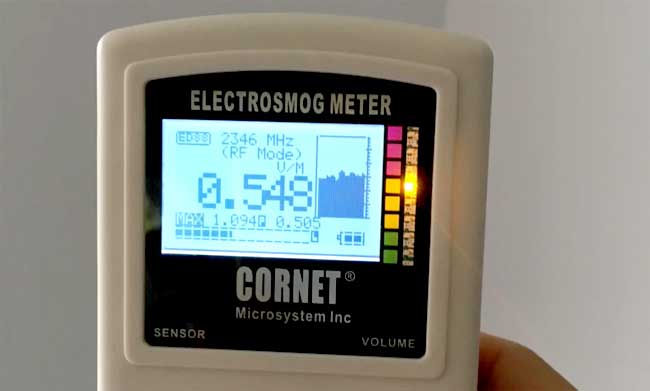 Tip
The Cornet is an instrument used professionals and amateurs alike for measuring these things. It’s actually quite affordable and easy to use. You can read more about it here (with a list of what it can test for). You need one of these in order to find out how much EMF radiation you have in your home.

I should say here that I’m not able to sort out any radiation from other cell towers.

It’s quite possible that we have several cell towers in our neighborhood because I’m living and a rather big city. I wouldn’t be surprised if we have more like three or five cell towers within close walking distance of our house. It’s also very possible that we could have other signals interfering with the readings.

But nevertheless, these are the numbers for our House on the outside and on the inside and there’s no doubt in my mind that the cell tower across the street and our own Wi-Fi are major sources of EMF for us.

I have also taken some new readings on our Wi-Fi router.

I have measured these numbers at several distances from the router as you can see below. But as I mentioned above, we have a cell tower pointing directly toward our house from the outside.

This also means that my EMF readings on our Wi-Fi router will also pick up a lot of radiation from the cell tower across the street. Since I cannot turn off the cell tower signal we will have to live with numbers that are not completely isolated to the wifi router signal.

Here are the numbers:

Note: My EMF meter did pick up some pretty high spikes even at a distance of 1 foot from the Wi-Fi router. At one point it was over 2 V/m But most of the time it stayed around the 1- 1.5 V/m.

According to the building biologist and expert in the fields of EMF, we should aim for no more than 0.2 V/m radiation in our homes during the daytime and 0.06 V/m during the night. So it’s important that we distance ourselves from strong RF radiation sources such as our wifi routers and access points.

As I move further away from the router I’m pretty sure that my EMF meter is primarily picking out the signal from the cell tower outside. So I don’t think there’s any point in measuring the radiation at distances over 1 foot in this case.

The radiation will definitely wear off quickly when we move away further than one foot. Here we need to remember the “inverse-square law” which states that every time we double the distance to a radiation source, we will get a 4X lower radiation. So if we were to move one feed further away we should expect the radiation level from the router to be around V/m if the numbers above were ONLY picking un the EF radiation from the router.

As always here, distance is your friend when you’re trying to eliminate our reviews the EMF radiation.

How To Get Rid Of Wifi & Cell Tower Radiation Completely

If you are very sensitive to EMF radiation or if you are suffering from EHS (electromagnetic hypersensitivity) You might have to get rid of the radiation from cell towers and Wi-Fi completely.

Here’s how are you can do it.

1) Wire Your Laptops And Throw Out The Router

It’s a hundred percent impossible to get rid of the Wi-Fi signal in your house by using a cabled connection instead.

You simply need to insert the ethernet cable directly into the slot at the router and connected into a switch. The switch will give you up till 10 ports where you can connect all your different laptops and computers in your home.

It does take a while to install all the wires around your house but it is definitely worth it. Especially if you’re suffering from EHS.

By doing so you can finish off by throwing out a router and get rid of the Wi-Fi radiation in your own 100%.

2) Shift To Fiberoptics If You can

We are lucky because we have a fiber connection which means we can eliminate our wifi radiation completely when we wire our computers with ethernet cables.

This is one of the big differences between fiber optic Internet and internet (or just “fiber”) via cable TV (Coax) or the phone connection (DSL). Fiber technology communicates via light waves inside tiny plastic tubes and therefore we have zero radiation from the “wires” which are actually thin glass-like cables.

But we aren’t able to turn off the Wi-Fi signal just yet because we have several tenants in the basement who are dependent on our wireless Internet signal. Otherwise, I would definitely turn off the signal altogether in order to wire all our laptops and computers.

Since you cannot remove cell towers you will have to either remove yourself or do some extensive work with a building biologist form your area in order to get to the bottom here.

It’s much easier with your Wi-Fi signal. You control whether you need wireless internet and you can simply unplug the thing and wire your router to your computer.

Several people have been forced out of the city to live in the countryside. In our family, we take long camping trips now and then and we do what we can to reduce that your EMF in our house at home. We live in the city and really like it here so we have to take some drastic methods in use in order to protect ourselves.

The next that we are going to take is to paint all walls toward the cell towers with EMS shielding paint. I am trying to learn all I can about the EMS shielding paint at the moment, and I will definitely do a series of articles on it as I learn more about it.