You have probably heard that wifi routers emit radiation. But what kind of radiation is it and how does it affect us?

What Kind Of Radiation Do Wifi Routers Emit?
Wifi routers emit radio frequency (RF) radiation. The signal frequencies are between 2.4-5 GHz and the radiation quickly decreases as you move away from the router. The wifi radiation can also be emitted from access points that work similarly to routers.

Here’s everything you should know about the radiation from Wi-Fi routers.

What Type Of Radiation Do Wifi Routers Emit? 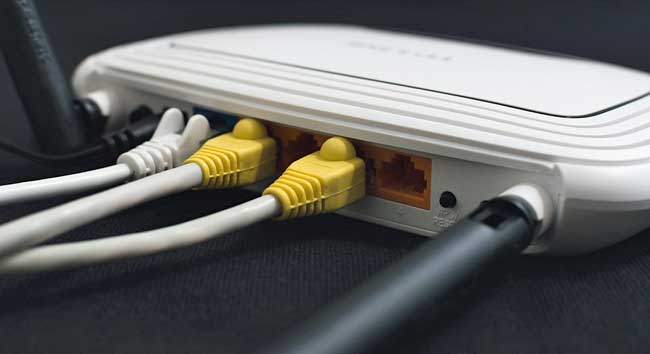 These are wave types in the upper end of the radio frequency spectrum. The term “radio frequencies” can be a little misleading because we are not only talking about radios.

We are talking about the waves from radios but we are also including a long list of other types of devices than radios. The term “RF radiation” (radio frequencies) was coined around the beginning of 1900 and this is still the term we use for describing our wireless technologies.

You find the exact same type of radiation from these devices:

As you can see, we have a long list of different devices and things that emit RF radiation.

But as you probably have guessed by now, the strength of the radiation varies a lot. We typically find much stronger signals from Wi-Fi routers access points than we do from wearables and Bluetooth devices. This is an important distinction because you need to know how powerful the radiation from your wifi router is in order to protect yourself properly.

How Strong Is The Radiation From Wifi Routers?

I like to do my own readings with my EMF meter.

Yesterday I took some readings on our Wi-Fi router but before we get into the numbers let’s clarify what we are talking about here.

We measure the strength of the wifi router radiation in either V/m (Volts over meter) or mW/m2 (Microwatt per square meter). This tells us how strong the impact of the radiation waves is on a certain area.

These are the number I measured around my wifi router yesterday:

As you can see, the amount of radiation decreases quickly as we move away from the Wi-Fi router. This is a very important point because if it wasn’t this way we probably wouldn’t be able to keep our router indoor.

Every time you double the distance to the source you decrease the level of radiation four times. So it’s a 1:4 correlation. This is also known as the inverse-square law.

If you take a closer look at the fine print in the booklet that came with your smartphone you will notice something remarkable. The smartphone manufacturers are actually required to let you know about radiation. In the booklet, you will be advised to never use the smartphone any closer than 1 inch from your head.

Not many people know about this because is not something the companies are typically vocal about.

This is very interesting when we are talking about radiation from Wi-Fi routers.

The Wi-Fi router is a much stronger radiation source than your phone. So it’s even more important that you never place yourself right next to a Wi-Fi router. Otherwise, you would expose yourself to radiation limits much higher than the official guidelines from the leading building biologists.

According to building biologists and EMF experts from around the globe, we should not be exposed to RF radiation levels above 0.2 V/m in our homes. This is for daytime. At night the numbers should be as low as 0.06 V/m.

So, as you can see, these levels are a lot lower than the readings I got from my Wi-Fi router above. You typically need to distance yourself 6-8 feet from a router in order to keep the radiation at the advised levels.

The guidelines from the FCC is set to 61,4 V/m but this is a value that hasn’t been updated since the late 1990s. This is actually pretty crazy because today we are using our phones (and a long list of other wireless devices) much much more than 20 years ago.

How Is RF Radiation Different From Other Types Of EMF?

As we looked at above, the radiation from a Wi-Fi router is categorized as RF radiation. But we also have several other types of radiation.

Here’s a list of the different types of EMF radiation:

The radiation types at the top of the list are what we call ELF and RF radiation. These are short wave radiation and as we moved down the list, the wavelength becomes shorter and shorter.

The shorter the wavelength is the more harmful and dangerous the radiation also is.

When you put your hands next to a router you won’t feel a strong wave of heat emitted from the source. This is because we are talking about short wave radio frequencies.

The radiation from our Wi-Fi router is also within another category. This is the category of non-ionizing radiation.

Let’s return to the list of different radiation types above.

The first five types of radiation are all among the non-ionizing types. Then we have the UV-light off which some of the spectra is non-ionizing and some of it is ionizing. This is also where we find the wifi router.

X-rays and gamma rays are always ionizing and some of the ultraviolet light is also.

These types of radiation are very dangerous and they will quickly cause cell damage when they touched your skin. This is also why you are always wearing a lead-apron when you are having x-ray photos taken at the dentist.

Traditionally, we haven’t categorized the non-ionizing radiation as dangerous to humans. But this is starting to shift these years. More and more scientists are finding evidence that long-term exposure to RF radiation is dangerous to our health.

We are constantly being exposed to radiation from our wifi routers and cell towers as well as smart meters and smartphones. The list goes on and on.

We don’t have much data yet on the long-term effects of radiation from RF radiation. But we are seeing more and more evidence that it is more dangerous than we previously thought. Scientists have found direct correlations between tumors in rodent and RF radiation.

This is very important because our kids are being exposed to wifi routers everywhere as well as tablets and phones. We need to teach them to keep them at an arm’s length.

Countries like Switzerland, Greece, Chile, New Zealand, & Austria are removing cell phone towers next to kindergartens and malls. They put it on a hill instead of placing them on the building next door. This way they can beam the signal from a more safe distance.

It’s important to ask questions like what type of radiation our wifi equipment like routers and access points emit. We need to take precautions because our kids will be exposed to these things for a lifetime and their skulls are thinner and more vulnerable.

According to Daniel Debaun who wrote “Radiation Nation”, kids are 2X more impacted by wifi radiation because their skulls are softer and smaller. So the RF radiation can more easily reach the brain.