Are you wondering how the radiation from your Wi-Fi router is impacting your plants? Well, you are not the only one.

Dutch scientists have performed an experiment to show exactly how plants and trees react to radio frequency radiation.
This is the type of radiation we find in wifi signals.

Here are the findings from the research.

Abbreviations used in this article:
EMF: Electromagnetic Fields (All types of radiation)
RF: Radio Frequencies (Radiation from wifi, cell towers, and other wireless technologies
V/m: Volts over meters (How we measure RF radiation) 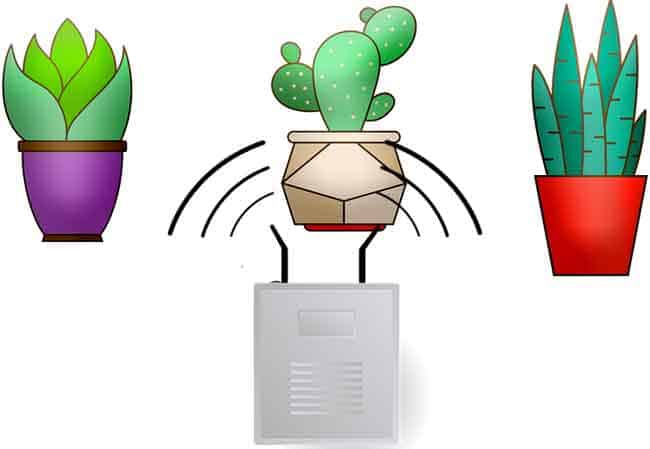 Let’s first take a look at how a couple of Dutch scientists performed a test.

After the four months has passed several off the trees near the router had shown clear signs of damage.

It’s important to note here that the proximity had to be around 50 cm between the plans and the Wi-Fi signal. Otherwise, the effect on the leaves and the plans were not detected.

So we can already hear tell that the distance between the radiation and the plants matters a lot.

So, what happened to the plants?

After a couple of months, the plants began to show a metallic luster.

Basically, the leaves would start to get affected by the RF radiation in a very visible manner. When leaves start showing a metallic luster on the leaves it’s clear that they are not doing well. It’s only fair to assume, that the luster will prevent the leaves from interacting properly in the photosynthesis.

This shows a direct correlation between the RF radiation from the Wi-Fi router and the well-being of the plant. It’s quite remarkable to see such a radical transformation of leaves from longwave radiation such as radio frequencies.

The study was done with 20 plants which were placed into 2 different chambers. So we’re not talking about a single plant here. We are talking about consistent results across several plants and over a rather short period of only a couple of months.

How Can I Protect My Plants From Wifi Radiation?

Let’s first clarify which type of radiation we are talking about when we are looking at Wi-Fi radiation.

The radiation we get from a Wi-Fi router is called RF radiation. RF stands for radio frequencies and these are longwave frequencies that impact living cells over time.

We find similar types of radiation from mobile phones, tablets, laptops, Bluetooth signals and the long list of other Internet-connected devices.

So how exactly can I protect my plans from this RF radiation?

This answer is quite simple:
You need to remove your plants away from the emitting source.

When we are talking about RF radiation the strength of the radiation is quickly weakened when we add distance to the source. This is also why you will never want to be anywhere near your Wi-Fi router because it does emit a pretty high level of EMF radiation.

In this case, we are talking about our Wi-Fi router but the signal could also come from a long list of other radiation sources.

These devices all emit RF radiation similar to the radiation we find in wifi routers:

In order for the plants to get affected by the signals, they would have to be exposed to significant amounts of radiation over several months. My guess is that you won’t see any changes in your plants even if you keep your smartphone or your tablet right on top of a plant for several months.

We need a stronger signal than the one our smartphone can emit.

Unless it is connected to your wifi.

How Much Radiation Is Required To Harm Plants?

In the experiment where the plants died, they were placed 1.6 feet /50 centimeters) away from the wifi router. Below I have measured the radiation levels from a standard home router at the same distance.

Here are the same readings from a distance of only 2 inches (5 centimeters). This is just to show you how quickly the radiation levels increase as we move closer to the source.

As soon as we switch the phone or the laptop unto the Wi-Fi, the radiation levels spikes. And so will the impact on our plants if they are anywhere near these sources.

So, it’s important for your own health as well as the health of your plants to keep your wifi-connected devices at a safe distance. Luckily the radiation levels decrease quickly when you move away from the source. This has to do with the so-called “inverse-square law”. This law tells us, that every time you double the distance to the wifi signal the amount of radiation will be lowered four times.

Other Studies On Plants Reacting To EMF Radiation

We also find other studies on how Wi-Fi signals are impacting the well-being of plans.

One specific study that raised a lot of eyebrows were made by five young students from Denmark. They also had two groups of little plants that they placed in two rooms. One group was being exposed to wifi radiation and the other group was not.

The only difference here is that they used cress.

Here’s exactly how they performed the experiment:

I think you will be able to guess which of the two plates above were being exposed to the Wi-Fi radiation.

The study gained a lot of attention in the scientific communities and even ABC reported on it.

It’s quite remarkable to notice how much the radiation from the Wi-Fi router this affecting the growth of the plants and the trees in these two scenarios. No wonder we are being highly affected as human beings when this radiation can affect plants in this way.

One of the main problems with RF radiation is that we do not have enough data to study the long-term effects on our bodies. Wi-Fi and similar wireless technologies have only been around for a couple of decades. So, we will have to wait for another set of decades before we know exactly how this technology affects our bodies in the long run.

The experiment above from Denmark was actually performed by a group of students because they felt tired after a long day of being exposed to the Wi-Fi radiation in the classroom.

They suspected that the problem came from the Wi-Fi radiation. So they chose to perform this experiment on a group of plants.

The actually won a “Young Promising Scientists” money prize for the experiment.

It’s actually a great idea to perform the same experiment home. If you have smaller kids you can teach them a lot about Wi-Fi and RF radiation by doing the same experiment in your home. It won’t cost you more than a few pennies and after a week or two, you should see the results from above.

Because cress grows so quickly, you would have your results much quicker than the guys who did the experiment with the trees in the Netherlands.