Transformers emit strong magnetic fields which we call EMF. These can easily be measured and controlled when you know why.

Let’s go through the house and find the many transformers and see how much EMF they emit.

The levels of exposure from transformers vary a lot. Here are 5 of the most common transformers we find in our homes and you can see the readings from our Cornet EMF Meter.

This is the device I used for my readings: 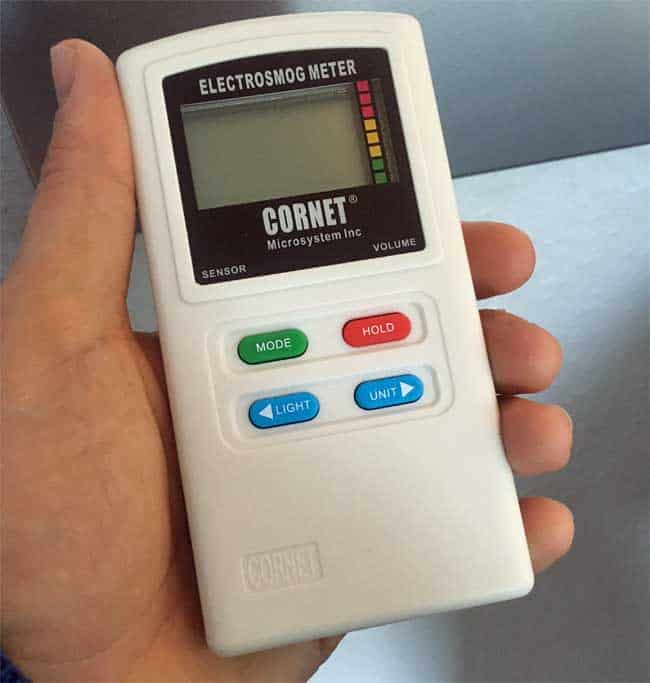 Tip
The Cornet is an instrument used professionals and amateurs alike for measuring these things. It’s actually quite affordable and easy to use. You can read more about it here (with a list of what it can test for). You will need one of these if you want to know how much EMF radiation you have in your home.

This is how I measured the levels:

These are the big boxes that connect the power lines to your home. They reduce the number of volts in order to power your electronics properly (step-down transformers).

People often think the transformers on the poles outside their home are causing a lot of radiation inside their home. But this is rarely true.

In our homes, we aim to reduce any EMF from magnetic fields to a number below 1 mG. This is typically possible when you pay attention to the best practices for reducing EMFs in your home.

You can read more here about safe distances to power lines.

Most of all electronic devices will use a charger in order to change the voltage from the house wiring to a more appropriate number for the device. This can be a cell phone charger or a laptop charger.

These chargers are basically transformers.

Here are some readings I just did today on some of the chargers (transformers) in our home:

Note: These readings were calculated at a distance of 1 inch from the transformer.

We always aim for no more than 10 V/m when we are looking at magnetic fields during the daytime. During the nighttime, we want the radiation to be a lot lower because we don’t need anything to be connected to the power grid. Here we aim for 1.5 V/m.

Of course, it would be great to have the same low levels during the daytime of this is simply not possible because we are using our utilities and electric devices during the day. The other reason why we are mostly concerned about the nighttime levels is that our bodies need to rest during the night.

Our kitchen appliances almost always create the strongest magnetic fields in our households. This is because they have electric motors but the transformers also emit EMF.

Here are some numbers I just measured on my own appliances and kitchen appliances:

Remember, these were the max limits I measured over a period of the minute or two. So this doesn’t mean that they will emit these levels of magnetic fields all the time but the max limits are typically how building biologists measure the levels in homes.

The transformers in our home appliances are very strong transformers. The fridge and freezer will typically also have a strong electric motor inside them which will also be measured along with the transformer. So we need to take this into account that the total amount of radiation comes from the motor as the transformer.

It’s really important to be aware of these magnetic fields around our kitchen appliances. Especially those that are plugged in all the time.

When we are talking about the fridge in the freezer we don’t want those to be anywhere near chairs or places where we sleep.

You need to make sure there isn’t a freezer or a fridge standing directly against the wall on the other side of your bedroom. If you are living in an apartment it’s important to know what’s on the side of the wall. If you are sleeping 1 foot away from my fridge you will not get much rest during the night.

Unless you have access to the room next to your bedroom you will have to do your own readings. You can do so with the meter I used to buff which is the Cornet ED88T Plus. It’s a really great instrument that you can get for less than $200. You can read more about it here where I also have a link to buy it.

How To Shield The Radiation From Transformers

You typically don’t need to shield the space around your transformers. This is because the magnetic field decreases very quickly as soon as you move away from the source.

Transformers can create a very strong magnetic feel that they are only present very close to the transformer itself. As soon as you move away just a couple of feet you will have increased the radiation significantly.

One of the worst sources of radiation in our homes is the transformer and the motor inside the fridge. As we look at above, it can create magnetic fields of around 700 1,000 V/m. We never know where the motor is located inside the fridge so we just need to make sure the radiation coming from it.

The radiation is typically strongest from the back of the fridge where we typically find the motor located.

Why Do Transformers Emit EMF Radiation?

When the metallic core of the transformer is being exposed to the volts that run through the first winding it will get magnetized. Now the magnetic field is created which we measure in mG (milliGauss). This is the radiation we can detect from the transformer.

Transformers are pretty basic electric devices that do one thing. 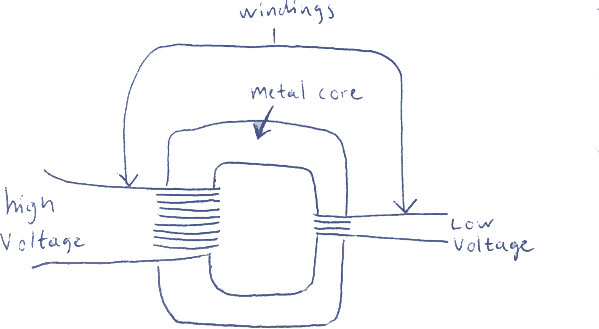 How Do I Stop Transformers From Emitting EMF Radiation?

As soon as the transformer is turned off the radiation disappears. But remember, it’s not enough to just turn off the electronic device that is connected to the transformer.

In order to get rid of the magnetic fields, we need to make sure we have no current running in the wires.

The easiest thing to do here is to simply unplug the whole thing. As long as the device is connected to the electrical cord we will have the magnetic field. This is often confusing to people because you would think that you can remove the magnetic fields around a lamp or a computer as soon as you disconnect the device from the charger.

But we need to unplug the charger from the power socket in order to remove the magnetic fields around the transformer.

This is also why building biologists advise people to cut the power completely to the wires that surround their bedroom when it’s time to go to sleep. Otherwise, we will have magnetic fields in the walls and below the floor or where ever the wires are running.