Powerlines are major sources of EMF radiation. Especially high-voltage powerlines pose a risk as they contain enormous amounts of electricity.

How Far Does EMF Travel From Power Lines?
Radiation from power lines is categorized as ELF (extremely low frequency). This type of radiation can travel several hundred meters. At a 700 feet (213 meters) distance, the radiation will typically be reduced to less than 0.5 mG. This is generally considered a safe distance.

Let’s take a closer look at what you need to know to stay safe from the radiation from power lines.

How Far Does EMF Radiation From Power Lines Travel? 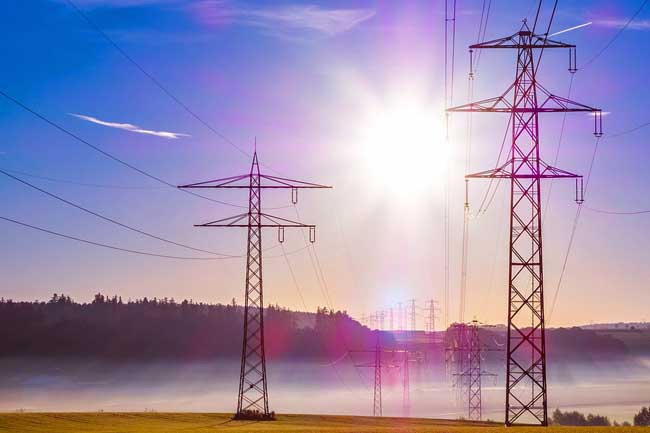 The radiation from power lines are categorized as MF radiation (Magnetic Field radiation) and these waves can travel short or long distances depending on the number of volts involved.

With expensive and sensitive equipment you can measure the magnetic fields from distances longer than the 700 feet we mentioned above (213 meters) but you shouldn’t be worried about the radiation that falls outside this distance. The effect wears quickly off when you distance yourself to the source of EMF so distance is always the best solution if you cannot turn the signal of (or block it).

When you are outside the 700 feet (213 meters) distance, the radiation level from the magnetic field will typically be less than 0.5 mG.

However, if you are hypersensitive to EMF, you might need to get the levels even lower. You will probably have to reduce the radiation to around 0.1 mG which is possible when you use more complicated means of protections. Such as:

But be aware that these are quite expensive and radical ways to protect yourself.

Before you focus on external factors, such as high-voltage power line radiation, you should always start by focusing on the devices and Wi-Fi signals in your house. These are much easier to control and turn off.

So even though the high voltage power lines look really alarming, you should start by focusing on your phone, tablets, laptops, wifis, etc. These signals will travel much shorter than the EMS from the powerlines. But they are more important because they are closer to your body so they can do more damage.

We always want to shield the bedroom in our houses the most. This is because when the body is in rest mode during the night we need to be able to rest as much as possible. This is vital for all the basic functions and the body. When we sleep at night, the body will regenerate itself and we should give it the best possible conditions to do so.

All of us are constantly being exposed to EMF’s in our cities and even the suburbs. So it’s really important to create a safe and radiation-free environment in our bedrooms in order for our bodies to get the rest it needs.

What Type Of Radiation Do Power Lines Produce?

High-voltage power lines produce radiation of the ELF type. This is what we call “extremely low frequency” radiation and it has a very long wavelength.

This also means that we are talking about the low-energy electromagnetic spectrum even though we call it high-voltage.

These words can be misleading so we need to do a little digging here.

When we added enough current (volts) to these low-frequency-type waves, they do become dangerous. The current in high-voltage power lines is typically around 300,000- 700,000 volts which are a lot more than the current that flows in our homes.

How Far From Power Lines Is Safe To Live?

This type of EMF can travel very far compared to other EMF sources such as routers, Bluetooth, smart meters, etc. So it’s really important to identify these transmission lines and make sure to block the radiation if you are staying too close to them.

But just how far should you get in order to avoid getting too much radiation?

It’s a tough question to answer.

You will find several examples of power lines that emit enough radiation to reach more than 700 feet (213 meters) but at this distance, you should expect the radiation level to have decreased significantly and be no more than around 0.5 mG.

This is below what we normally aim for as a limit for daily ELF radiation in our homes. Several specialists in the EMF space will tell you that 1 mG is a good number to aim for in your home. But if you are extra sensitive to make magnetic fields you will probably need to get as low as 0.1 mG.

Some people respond more to magnetic fields such as these we find around power lines and if you know you are sensitive to this stuff you probably need to get further away than 700 feet (213 meters).

The only right thing to do here is to either consult a professional Building Biologist. There are several hundreds of these people in North America so you should be able to find someone in your area. You can also start by doing your own readings on the radiation with an EMF meter.

If you are sensitive to this stuff or if you suspect that you are, you definitely need to own an EMF meter. We will come back to what an EMF meter is further down in the article.

What Is The Risk From Living Near Power Lines?

Radiation from power lines can be dangerous when we are exposed to daily radiation over several years.

This is because the EMF radiation from the power lines will constantly bombard the cells in our bodies with low-frequency radiation.

The magnetic fields (MF) from power lines can produce radiation levels much higher than what some countries in Europe consider safe. Here in the U.S, we have the highest limits for how much EMF radiation we allow from magnetic fields. We allow up to 6,040 mG (milliGauss) while countries in the E.U only allow 1,000 mG.

The Netherlands and Norway only allow 4 mG which is more than 1,500 times lower than our standards here in the U.S.!

This is something to think about because this is still an area of science which hasn’t been completely investigated. We still don’t know the long-term effects of EMF at this level of radiation on now bodies.

So the risk here is that you will be exposed to more radiation than what is recommended. When that happens you can develop all sorts of problems.

How To Measure EMF From Power Lines

The easiest way to measure the radiation from power lines is by using an EMF meter.

Luckily, they are not too expensive. You can get a really good EMF meter for around $200. This is the model we recommend. It is being used by scientists and recommended by some of the frontrunners in the EMF community.

This is also the EMF meter I use myself and it’s really easy to operate. 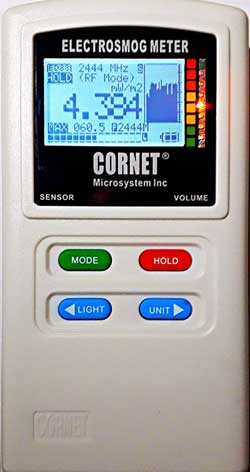 When you have an EMF meter like this you can measure all sorts of EMFs such as radio frequencies, Microwaves, and magnetic fields (MF) such as those we find around high-voltage power lines and regular power lines.

How Do I Protect Myself From Power Line Radiation?

If you happen to live very close to power lines you should first contact the local authorities to make sure there’s nothing you can do to have them take care of the problem. If the limits are alright according to the IEEE (6,040 mG), there’s not much you can do here. Then you have to take your own precautions.

Here’s how you can do that.

First, you will need to know exactly how bad the situation is. You might live pretty close to powerlines without any problems. It might be old power lines that aren’t being used anymore or it might be powerlines with a low current. The only way to know this is by measuring it with an EMF meter like the one we show above.

If you find the radiation levels to be too high, here’s what you can do.

First, you should try to shield off the walls the points directly toward the power source. This is not easily done and you would probably want to consult a professional Building Biologist. They will be able to take more accurate readings on the radiation and they will also be able to point you in the right direction here.

They were probably advice you to shield off your walls with EMS protecting paint and blocking film on the windows.

You should do this one step at the time because these can be costly procedures. You need to make sure that the radiation level is actually lowered and you want to monitor just how low it becomes for each step you take.

The shielding paint on the walls will have to be grounded by inserting our wire that goes into the ground. This can be difficult if your apartment is on the fifth-floor but if you are on ground level already it shouldn’t be too much of a problem.

You can also shield yourself by installing an EMF-protecting canopy around your bed.

This is much easier but it is not necessarily a lot cheaper than the other options. These canopies are pretty expensive and you also need to consult a professional Building Biologist here.