When we talk about EMF radiation we normally focus on radiation from electric fields, magnetic fields, and radio waves. But what about the sun, does it also emit these types of EMF radiation?

Does The Sun Emit EMF Radiation?
The sun emits lots of EMF radiation. This EMF radiation is what we call infrared light, visible light and ultraviolet radiation (UV). This is shortwave radiation that contains a lot more energy than radio waves and electricity which are longwave radiation.

Here’s everything you need to know about the EMF radiation from the sun.

What Types Of Waves Does The Sun Emit? 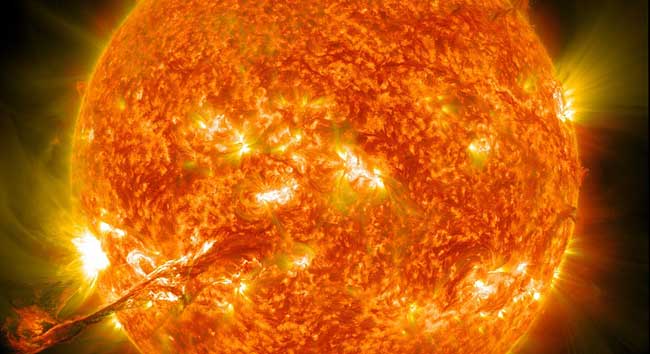 So, what types of waves does the sun emit?

These are the three types of radiation we get from the sun and we need the ultraviolet light in order to get our vitamin D. On the other hand, we do not want to get too much ultraviolet light on our skin because it also produces sunburns which are dangerous for us.

The ultraviolet light from the sun is actually the only type of carcinogenic radiation that also has the benefit for humans.

Does the sun emit longwave radiation?

The sun doesn’t commit longwave radiation and this is because it is extremely hot.

So as you know, the sun is extremely hot and this is why it is in emitting shortwave radiation toward the earth. The sun’s temperature is around 10,300 Fahrenheit (5,704 Celsius) and this causes it to emit these very special types of radiation.

So, the sun will not emit what we call RF radiation and ELF radiation. These types of radiation are what we find from electronic devices and power lines. It is because of the sun’s extremely high temperature that it doesn’t admit these types of EMF’s.

In Which Waveband Does The Sun Emit The Most EMF?

Most of the radiation we get from the sun this what we know as visible light. It falls within 600 THz (Terahertz), which is equivalent to 600,000,000 MHz (Megahertz).

This radiation contains all the colors from nature as you can see in the rainbow when the rain has fallen before the sun breaks through the clouds.

Once in a while, we will experience what is called solar flares. when this happens the sun can also emit X-rays which are really dangerous to humans. These are waves with the extremely short wavelength. They are also known as ionizing radiation and they are very dangerous because they can break down chemical bonds in our body very easily.

Now that the upper atmosphere has taken care of the most dangerous types of sun radiation the rest of it will travel the last miles down to the surface of the earth. This is the visible light, the infrared light, and the ultraviolet light. These are the three types of EMF we normally get from the sun.

The ozone layer is supposed to filter out most of the ultraviolet light from the sun. This is also why it’s a problem when the ozone layers are disappearing or getting weaker.

When the ultraviolet EMF is absorbed by the ozone layer it is transformed into heat. Some of it radiates back out into the universe and some of it will head toward the earth.

They are our main energy source and they heat up the earth.

The Sun Re-emit Radiation Back

As a result, the earth will also emit radiation. This is called shortwave radiation because the earth is not as hot as the sun.

If the earth didn’t emit radiation back out into space it would become warmer and warmer and eventually not be livable for humans.

This is also why we always have some background radiation here on earth. This radiation is much cooler and less harmful than the radiation from the sun because the wavelength is shorter.

What Controls How Much Radiation The Sun Emits?

The energy emitted from solar radiation is pretty constant from year-to-year.

Once in a while, we have what is known as solar flares. When this happens the sun can admit x-rays.

The solar flares play a big role in how much radiation is submitted from the sun.

But it’s also important to look at the factors that limit the suns radiation from our end here on earth. Here we have the ozone layer which is absorbing parts of the UV-light, as we looked above.

Whenever the sun is emitting high levels off shortwave radiation (such as x-rays) it’s important not to stay out in the sun at all possible. But most of the time it’s a great idea to get some amount of sunlight because it contains important vitamin D, which we need in our bodies.